Thank You to everyone who attended our Memorial on April 7th! 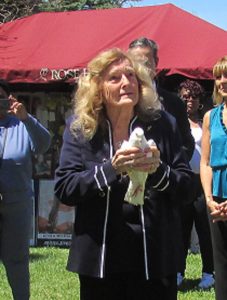 The Homicide Victims Memorial is a testament to the number of people murdered in this country whose lives were not in vain and who will be remembered forever. The elegant white marble kiosk rests on the grounds of Rose Hills Memorial Park and Cemetery in Whittier, California.

The Memorial was built through a very generous donation from Dr. Henry T. Nicholas, III, in honor of his sister Marsalee Nicholas. Dr. Nicholas also sponsored the 2008 Victims Bill of Rights Act, known as Marsy’s Law, named for his sister.

Since 1981, National Crime Victims’ Rights Week is celebrated every year in April. This week is dedicated to learn about victimization, the effect victimization has on individuals, families, friends and the community, and to promote laws, policies, and programs to help victims of crime. Every year, thousands of communities across the nation honor the dedication of those before us that established victim rights and renew commitment to guarantee that all victims have the rights and services they need to recover from crime. Victim Support Services participates in marches, tree-planting ceremonies, and many other activities that are held each year to promote victims’ rights and to honor crime victims and those who advocate on their behalf.The ceremony includes awards for distinguished services performed by District Attorneys, homicide detectives, Mayors, Governors and countless Victims Rights advocates who honor victims and their rights. Victims are able to write messages to their lost love ones on balloons, doves are released and candles are lit.